So Slate had a piece about AskMeFi.com called "When the hive mind works, it's a beautiful thing." I've been a registered user of Metafilter.com since -- whoa, my profile says 2000. Still, I'd never asked a question.

Here's what I asked as a test -- one of the most elusive pieces of information I've been after for years:

Does anyone else remember this toy, an electronic set of building blocks, or is it just in my faulty memory? Who was the manufacturer? What was the trade name? (How do I search for it on eBay? :)

When I was in elementary school in the mid-1970s, there was a toy we had that I liked a lot. It was designed to teach about electronics. There were roughly cubical pieces of plastic that adhered together using magnetic interfaces, all of them also sticking magnetically to a metal plate. The top surface was white, with the schematic diagram symbol etched into the piece in black. The underside was clear plastic, so you could see the component inside (resistor, capacitor, whatever). One way to think of it is as a version of Radio Shack's "10,000 in One" electronic sets, but those used loose wires that were connected together using springs. Because this toy was built to more closely resemble building blocks, it came across as much more graphically elegant. The manual was a set of schematics -- you'd assemble the diagram using the blocks, and voila! you'd have made some gizmo.

Within 30 minutes someone had correctly identified it, and also given a link to the current manufacturer. 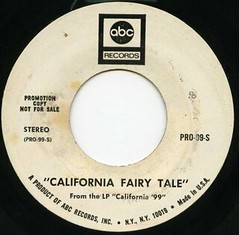 California Fairy Tale
Originally uploaded by halobrien
Today's just been a day for resolving ancient mysteries. I can think of no better evidence the information on the net is getting to a certain critical mass.

It's a fun stfnal track. I would type out the lyrics, but it would take a while. Anyway, it has some unique phrases in it: "crystalline eyes" and "try to disguise." (Yes, that's a couplet.) I've been entering those things into Google for years, because I thought sooner or later, someone would type it up.

Page 34 and page 35 of the yearbook of Temple University's class of 1972. (WARNING: annoying pop-up window each time -- but click on "close" and all will be well.)

The most important thing the anonymous yearbook editor did, though, was give a credit: "Jimmy Haskell, Bill Szymczyk. Joe Walsh"

Turns out it's not his album, though. It's Jimmie Haskell's album, California '99. Once I had that, it was "Unlock Special File Zebra!" time.

The scan of the 45 comes from this page, which is a nice write-up, and once had an .MP3 of the song, but no more. Alas. My only copy has been a cassette from Midland days that I'm going to convert Real Soon Now.

Amazon lists both a CD import and the original LP, both out of print (of course) and both for more money than I'd like to spend (especially if I'm saving up my Euros for a set of Lectron blocks...).

Still. Wow. Two multi-decade mysteries down in one day.
Collapse