I won't be doing this at the top of the hour, but at least I'll make it during the hour.

Anyway... I have two relatives who I know fought in The Great War.

Up there is my paternal grandfather, Harold Bruce O'Brien. Written on the original photo is: "Harry O'Brien in Phillipines, 1915."

I suspect Harry changed his name and birthday to get into the Army, and then stuck with it the rest of his life.

The other relative is my maternal great-grandfather, Addison Bright Evans. He joined the Canadian Army -- Service Battalion, CDF, 48th Highlanders.

He joined on August 5, 1917. Which is strange in a bunch of ways. He was naturalized as a US citizen on July 5, 1917. The US entered the war April 6, 1917. So... was he waiting for his naturalization papers to clear? Why did he join in Canada? Why did he give his birthplace as Canada when up until then he'd been saying England, which he'd also say later?

My family. Obviously I come by it honestly, from both sides. 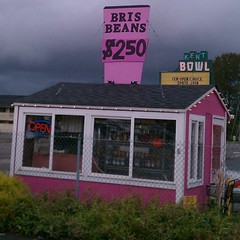 Bris beans
Originally uploaded by halobrien
I guess a "Bris bean" is what you plant when you want to grow a bris.

Asian Helper
Originally uploaded by halobrien
Is it for helping Asians? Is it to help you when cooking Asians? Hm. Is great puzzlement. 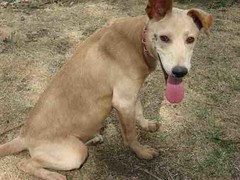 One year ago today, we picked up Kaylee from Saving Great Animals, a pet rescue group. The original intent was just to foster her until a permanent home could be found for her, but... we became that permanent home.

Up there is one of her original shelter photographs, showing just how goofy-looking she was presented. Here's a picture I took the 2nd day we had her: 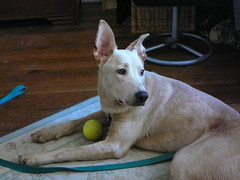 I don't think she would have languished for 90 days in the shelter if my picture had been used, rather than theirs.

"(T)he most important state of all (in assessing the Republicans' chances of gaining a majority in the Senate) was Washington. Republicans won Washington 88 percent of the time that they won the Senate by a single seat, but only 41 percent of the time that they fell one seat short. The difference there is 47 percent. Washington makes the difference between success and failure almost half the time."

Perhaps there are those who think the differences between the Democrats and the Republicans are no more significant than those between the Blues and the Greens in Byzantium.

I am not among them.

I have faith in the robustness of the American republic, and believe it can survive the turn of the wheel that must inevitably happen and return the Republicans to power eventually.

Still, I hate waste. If the waste of time, effort, blood, and treasure that will ensue after the Republicans' return can be held off legally and ethically as long as possible, through the strength of reason... I can only lend my voice to that call.

Please vote for Patty Murray, and then mail in your Washington ballot, if you're a voter in our state.

Which is, they lost a postseason series, this time to the Texas Rangers.

This isn't anything unusual for the Yankees -- after all, they lead Major League Baseball in having lost the World Series 13 times. But their postseason record in the 21st Century is one of unmatched futility:

This originally appeared at my other journal, http://www.halobrien.com/

Turn of head
Originally uploaded by halobrien
The light Kaylee is catching on the corner couch today has been fairly dramatic. More at my Flickr page, but I like this one best.

One of the fringe benefits of working for NetRiver is a selection of domain registration and hosting choices.

So, with due modesty, I present http://www.halobrien.com/ Also, a new email address, hal {at} halobrien {dot} com.

We went and saw The Social Network tonight. I liked it, and nodded sagely when many of my thoughts about advertising were being echoed by Aaron Sorkin in the voice of the character Mark Zuckerberg.

But that's not why I'm writing.

No, I'm writing because of a highly amusing piece of schtick in the early part of the movie. See, Zuckerberg blogs about having just broken up with his girlfriend, in 2003. His venue for his various vents is... LiveJournal. Specifically,

There is only one entry. It says, in its entirety: